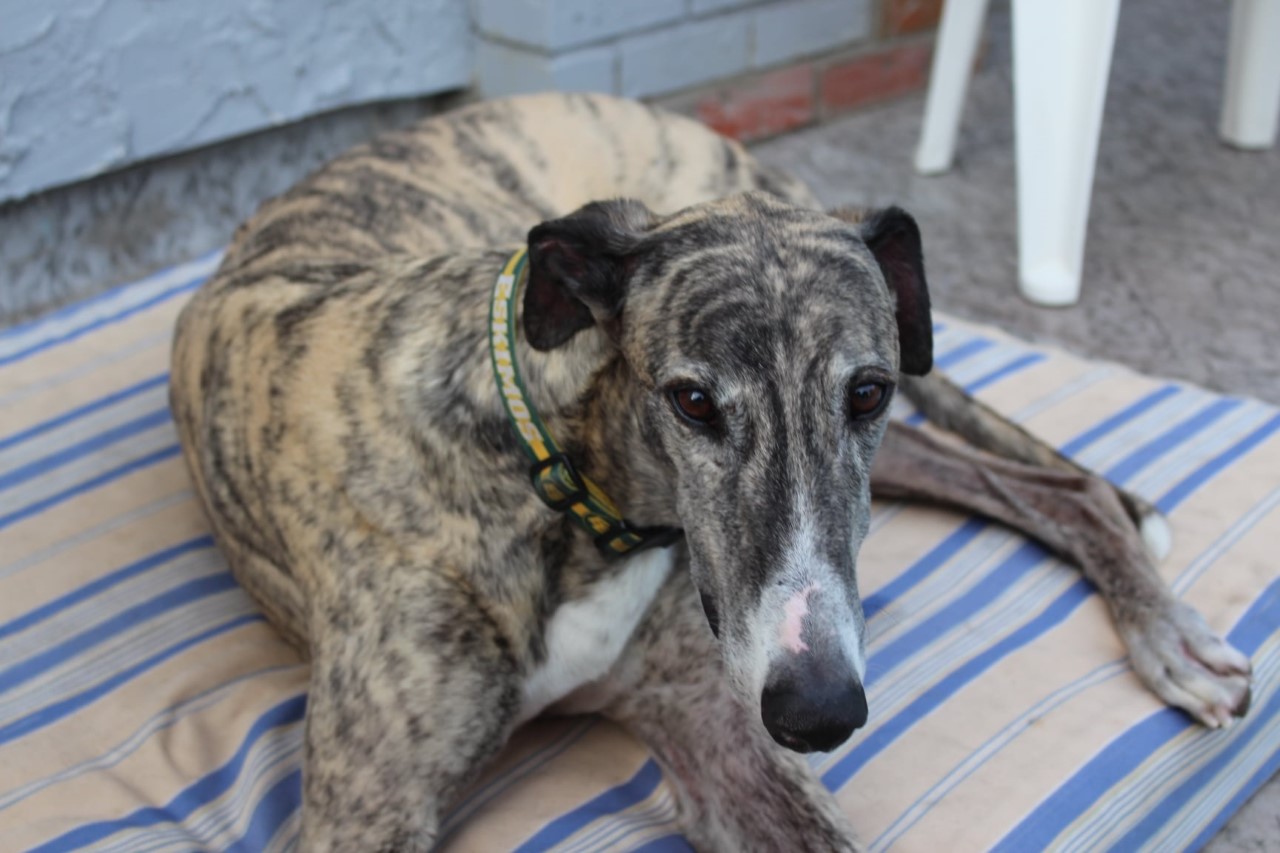 Meet my handsome client Hogan who is the sweetest most gentle, loving boy ever. He lives with a pack of greyhounds.

Hogan is a 8 year old retired racer, who came to his now owners, as a foster dog in 2016. They noticed that he had a big scar on his neck and weren’t sure why.

He was fostered for a few months and then was adopted out a couple of times. He ended back in their foster care in August of 2019 and they decided to make it his forever home.

In September of this year, a fight broke out among the pack and one dog was seriously injured. The owners were away and didn’t know who was responsible.

A couple of months after that, another fight broke out and one of the boys was bitten and required some stitches. Again, the owners were not there to see what had happened.

Another fight broke out a few weeks later and this time, the owner saw that it was Hogan. She was able to break up the fight quickly and within minutes Hogan had gone back to his sweet self.

The owners never would have believed Hogan had done this, had she not seen it for herself. It was so out of character for him. He was always so sweet and lovable.

After each of those fights, Hogan had ended up with a split in the tip of his tail. This is a common thing that can happen to greyhounds.

I was hired to work with Hogan to help his owners understand what caused this, and hopefully prevent it from happening again.

His owners didn’t know if it may have been caused due to the pain from his split tail or, from previous trauma that he had experienced.

At our initial session, the first thing Hogan asked me was “am I in trouble”? I said no. He told me that when his tail splits, it’s like a bolt of lightning that goes through his whole body and that the pain is excruciating.

I focused on Animal Communication and Energy Healing for our initial sessions. On our 3rd session I decided to do some trauma release work with Hogan. I worked on the recent fights he had with the other dogs. I felt a fairly big shift in his energy field but I knew there was more to be released.

At our last session, I asked Hogan if he would talk to me about the scar that he had on his neck.

He told me that he was a couple of years old when it happened. He was with his pack and doesn’t know why it started, but he was attacked by one dog. And then, other dogs started attacking him too. He said it was very painful and he thought he was going to die.

I told Hogan it was possible that this event was related to what happened with the fights he had recently been in. The pain from his split tail, triggered him to feel like he was fighting for his life again. And he totally lost control.

I asked Hogan if he would be willing to let me do some trauma release work on this event. He said that he was.

As we went through the process, it brought up a lot of fear in Hogan. I told him to breathe deeply, he was safe and I was there helping him every step of the way. We worked our way through it and then I did some more trauma release on his recent fights.

When it was complete, I felt an unbelievable, peaceful energy exuding from Hogan. It was so beautiful it brought tears to my eyes.

Hogan thanked me from the bottom of his heart. He asked me to tell his mom and dad that he loved them, and to thank them for getting me to help him.

I told Hogan that I loved him and he said that he loved me too. What an amazing, beautiful experience it was to help this sweet boy.